As head of the Land government, the Minister President defines the fundamentals of government policy. He appoints the Land ministers and represents the Land of Lower Saxony in external affairs. more

The Politics of Lower Saxony in Berlin

The main task of that representation at the EU in Brussels is to monitor and influence the formation of political opinion in the EU and to guide companies and associations headquartered in Lower Saxony through the paragraph and regulation jungle which governs the EU. more 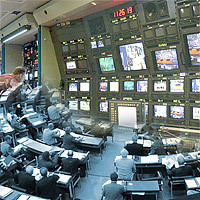 Especially in the social, charitable and interpersonal areas of our society, the voluntary commitment of fellow citizens is a necessity. When somebody earns special respect in these fields, an award for services rendered can be made. more

The State Chancellery is the "Ministry" of the Minister President of Lower Saxony. Here, the objectives of the Land government are implemented in terms of concrete plans and delegated to the various different departments. Staff divisions monitor progress and supply the Minister President with important decision-making aids after observing and analyzing overall economic and political development.
The Minister President's staff coordinate structural policies with the neighbouring Länder. In addition, the State Chancellery dictates the federal and media policies of the Land.

The constitution also grants the Minister President the right to pardon criminals, and such decisions are also prepared in the State Chancellery.

It is the department for conferring orders (Ordensreferat) which is engaged in the particularly "honourable" tasks of the State Chancellery: here, proposals for awards, honours and orders are processed. This is, incidentally, one of the organs of the Land which has never received a complaint in connection with one of its letters.