The State Chancellery is the "Ministry" of the Minister President. Here, the objectives of the Land government are implemented in terms of concrete plans and delegated to the various departments. Headquarters’ divisions monitor progress and supply the Minister President with important decision-making aids after observing and analyzing overall economic and political development.

The Minister President's staff coordinate structural policies with neighbouring Länder. In addition, the State Chancellery is directly responsible for the state archives and dictates the federal and media policies of the Land. The revised version of the inter-state agreement dealing with the Norddeutscher Rundfunk, the revised version of the Landesrundfunkgesetz (Land Radio Act) and the new Mediengesetz (Media Act) have ensured above all a greater degree of independence and diversity of the media and more decision-making rights for members of staff.

The constitution also grants the Minister President the right to pardon criminals, and such decisions are also prepared in the State Chancellery.

It is the Honours Department which is engaged in the particularly "honourable" tasks of the State Chancellery: here, proposals for awards, honours and orders are processed. This is, incidentally, one of the organs of the Land which has never received a complaint in connection with one of its letters. 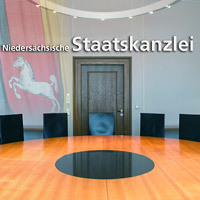